The Flash Friday contests always present us with interesting photos to work with, though in some instances they don't "speak" to me, and I can't think of anything to write. But this week, the photo gave me an immediate opening line. 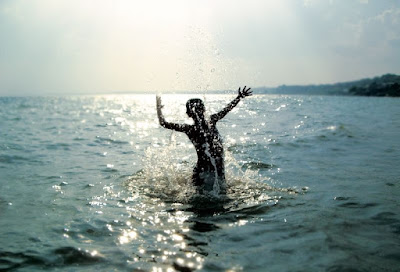 We also had to include a stolen identity or a mistaken identity. I'm not sure how well I did so, but I sorta used the latter.   Word count: between 140-150 words.

So here is "Water Dance."

From my vantage point, just beyond the tree line, I would watch her creating her watery art.  With each graceful sweep of her arms, she would bend the waves to her will, forming delicate sculptures, temporary monuments to the sea.

Then she would turn and dive away, her massive tail waving goodbye to dry land.

One day I ventured closer, out to water's edge. She pretended not to see me. But her waltz with Neptune took on a decidedly sexy tenor, a dance of seven shells, as it were.

The joyous joust between us continued for several weeks. Each day I would draw closer. Ankle deep. Knee deep. Thigh deep. I hoped she'd take the bait.

And I yanked the line.

The hook snagged her jaw.

She fought, but quickly tired.

I'm sure I'll miss her supernatural performances. But I won't miss my empty belly.

I guess I was in a wicked mood last week.

Posted by Michael Seese at 5:30 PM