Some days the words just flow. As has been the case on a couple of recent Fridays, there was both a Flash Friday and a Janet Reid flash fiction contest. And I managed to wrap up both before dinner.

For the Flash Friday contest, we were to work off this image 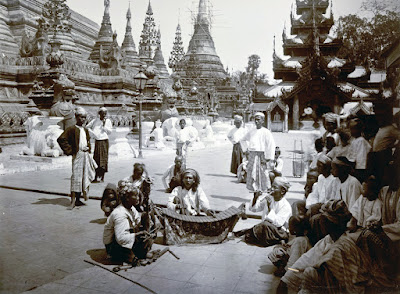 and include a either student or include a road worker. And, exactly 89 words.

I really don't remember what gave me the idea, but pretty quickly I had "Con Dolore" wrapped up and in the books.

I'd paused to wipe the sweat from my brow when a chill, defying the heat, traversed my spine. A siren song—close in distance, distant in memory—bade me to drop my pick-axe and pursue the fluid notes to their fountainhead, despite the entreaties behind me, begging me not to wander.

In a clearing sat a group of musicians, playing as one. Their faces conveyed the serenity I lost the day the soldiers came.

A sharp rifle retort punctuated the final note of our symphony.

Early tomorrow, I will post the Janet entry, "Where There's A Will...."

Posted by Michael Seese at 4:46 PM