So there was a new Flash Friday this week. But I never got around to sharing last week's entry. I think I'll circle back to last Friday, then catch up sometime in the next few days.

The 11/13 Flash Friday presented us with this picture 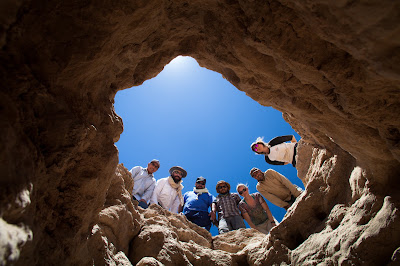 and gave us the following parameters.

- Include a statistician OR include an optimist
- Today’s word count: 103 exactly

Enjoying the rhythm and the rhyme, I decided to write a a story in verse, something that has intrigued me of late. In short order I had "Pitfalls."

Two days wandering in the desert.
Exhausted.
Low on supplies.
Thirsty.
Gathered around the murky pit, we three:
the optimist,
the statistician,
and me.

The optimist peered into the abyss.
"I'll bet there's water down there. If I jump just right, I'll miss
those rocks, and land with a graceful splash."

The statistician looked at him askance.
"Are you crazy? Do you really think you can chance
a foolhardy dive?
I calculate your odds of staying alive at—"

Though it didn't win, it did earn a shout out: "Also to Michael Seese‘s “Pitfalls“ for an amusing story with its fun use of both dragon elements." (The "dragon elements" are including the statistician or the optimist.")

Posted by Michael Seese at 9:18 PM