Flash Friday: A Whale Of A Tale

We were given this picture 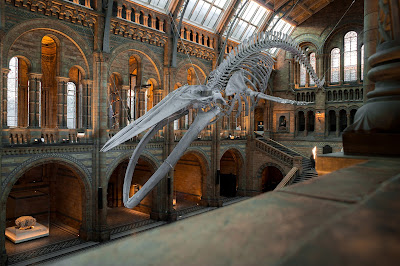 and asked to incorporate either a non-human character OR  include a phrase in a non-English language. My first thought was a throwaway line, like "It had a certain je ne sais quoi." But that would have been cheap.  Then I considered something from the whale's perspective, which would have allowed me to use some made-up whale language.

But as the day wore on, nothing came to me.

Then, as I was walking the dog, the idea hit! I pulled out my phone and dictated about half of it, wrapping up when I got back.

The grainy image flickered to life across the flat screen.

"This is Malcolm Dalton, BBC News. I am standing outside the Natural History Museum, where scientists have made a startling discovery."

The focus shifted to a bushy-eyebrowed scientist, who absolutely deserved black and white coverage.

"Though marine biologists made every effort to save the beached whale, their labors ultimately were for naught. Pity. When we articulated the carcass, inside her belly we made a startling discovery. The skeletal remains of a human. Further examination determined that he was a male, perhaps 50 years old when he died. We can only speculate as to his identity."

Back outside, the intrepid hairpiece now stood before a phalanx of rabidly waving signs. The most prominent read simply, "Jonah 2:1-10."

"As you can see, the identity of 'belly man’ has inspired countless—"

Pinocchio switched off the telly.

"Good old Geppetto.  I'll sure miss him," he said, his nose gaining an inch.

If memory serves, I have not submitted any humorous stories for this go-around of Flash Friday. We'll see Monday how it goes.

Posted by Michael Seese at 7:22 PM

Email ThisBlogThis!Share to TwitterShare to FacebookShare to Pinterest
Labels: A Whale Of A Tale, flash fiction, flash friday, pinocchio