I wanted to catch up on last week's Flash Friday, as there will be another tomorrow. And perhaps there will be a Janet flash contest as well. (And just today I learned of an Australian flash fiction contest which posts its prompt on the first Friday of every month. So I'm gearing up for that one as well.)

For this week's contest, we were given this photo 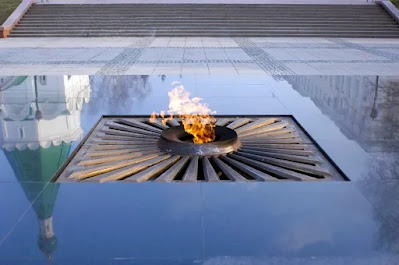 I had a REALLY busy day last Friday. But...

My son asked me to drive him to a friend's house, about 15-20 minutes away. Heading home, I brain-wrote nearly 300 words. So then I had to severely edit it down. But the end result was "Afire."

The men with the guns and the iron chains came and raped my village. My wife, my children, me. They threw us on filthy ships and stole us to America, then tore all I had left away from me. In the still of night, amidst the others’ sobs, I would light a fire to honor their memory, and pray that some day there would be justice in the world.

The Nazis came and dragged us from our beds. In the camps, we spent four years starving, suffering, dying. My mother, my father, my sister didn't make it out. I did. And every year, on the anniversary, I lit a fire to honor their memory, and prayed that some day there would be justice in the world.

One sunny afternoon, I stood, helpless, as the police officer pressed his knee into the back of a man's neck, and held it there until he died. The opportunists hijacked our righteous anger to burn and plunder. In the privacy of my home, I lit a fire to honor his memory, and prayed that some day there would be justice in the world.

There is no justice yet.

Though it didn't win, one judge noted, "Mark King‘s 'Where Her Soul Goes to Walk' was an important, excellent, and moving commentary on race relations and the lives of marginalised people, as was 'Afire' by Michael Seese – powerful and meaningful work, a privilege to read."

I'm not exaggerating when I say I'm thrilled by each and every kudo.