(Somehow I forgot to hit the "publish" button on Saturday. So this post SHOULD have been before yesterday's.)

As I mentioned in my post on Thursday, I knew a busy week of flash was forthcoming. So, I'm please to say "one down, and two to go." (Actually, it's two down, since I've already written my Janet Reid piece, and will post it tomorrow.)

In this week's Flash Friday! our mission was to build on this picture: 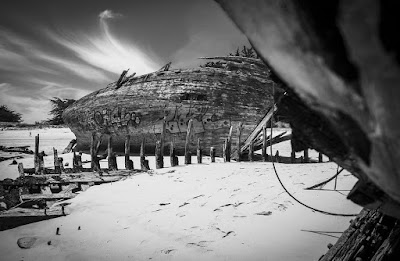 and write up to 200 words about an inventor, or a conspiracy theorist. I contemplated the image of a weathered boat on a beach, and thought about what an inventor would do to get there. My mind began tumbling over big ideas, which led me to "Life 2.0."

They said it couldn't be done. I proved them wrong.

A simple carpenter, I'd never asked for more than an opportunity to earn a living. Then I heard the call.

I labored, day and night, beneath the sun's might and the torches’ light.

The naysayers gathered outside my home to enjoy the spectacle. Mocking me became a sport, of sorts.

"Two of each? Do us a favor. Leave the skunks behind."

The ark finished, my family and I gathered our wards, huddling in the dark for seven nights, the unrelenting jeers outside our lullabies. The torrent, on the seventeenth day of the second month, drowned out their vitriol.

Afloat, asea, we rode the whims of the currents for one week, two weeks…

On the 28th day, one of the animals took sick. The plague spread throughout the ship. The animals overcame it. My family did not.

Two days later, we made landfall.

Now, sitting on the unforgiving beach, I watch nature reduce my ark, and me, to our bare bones. Yet I find a small measure of comfort knowing that animals will some day reclaim the Earth. Alas, not so the human animal.


I like it. It's fun in an overbearing, bombastic sort of way.

Posted by Michael Seese at 7:03 PM